In Praise of Sunsets

When was the last time you watched a sunset? Can you remember? Was it on the train? In a field? In a beer garden? Maybe you watch it every day. Maybe the last one you saw was in a movie. Nowadays, given our hectic schedules, and the prevalence of attention sucking machines (be it an iPhone or a car), it’s not always practical to stop what you’re doing for five minutes to look at the sky. Maybe that’s what makes the sunset so special; it’s a daily show, rarely watched, but always watching us. 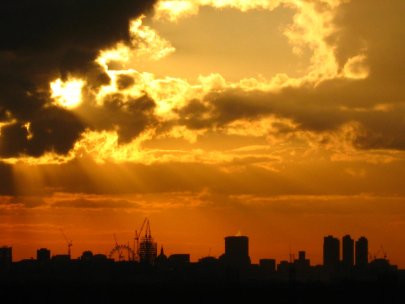 Although the rise and fall of the sun is a constant in every human’s life, it’s a constant that’s forever changing. Every sunset is different, being affected by a host of factors, from the density of the clouds to the time of year. Not least of these factors is where on Earth you’re viewing it from. Has any Briton ever gone on holiday somewhere exotic and not taken a sunset photo? I shouldn’t think so, it’s too hard to resist. The quality of the light is different abroad, the hues more vivid, the sky an actual colour instead of the grey blanket that permanently covers the British Isles. Also, whether we’re aware of it or not, by watching a sunset from another location, we are briefly entering into the daily experience of the people living there. We may never fathom out their cultural mores, but we can get a sense of how they see the world through how they see a sunset.

So we enjoy them when we travel, but what hope on the home front? We may not always be able to watch a sunset from beginning to end, but sometimes, even the briefest flash of it can erase the bitter aftertaste of all the daily annoyances we’ve suffered. I remember taking a bus over Vauxhall Bridge at sunset. We emerged from among the concrete and glass canyons of the city-scape and were briefly immersed in light. Us passengers on the top deck floated in it, fleetingly free and exquisitely calm. Phones became muffled, conversation ceased – the city was beautiful, a beacon. The once imposing buildings became friendlier, playfully transformed into nothing more than man-made canvasses for nature’s inimitable palette.

Much has been made of modern man’s estrangement from nature. It becomes increasingly hard to even dream about getting back to it, as there’s so little left to get back to. But there’s hope. Ralph Waldo Emerson, the poet and Transcendentalist, said that the “sky is the daily bread of the eyes,” and nothing signifies the truth of this more than a sunset. Everyday you have the chance to step out of yourself for a few moments and enter into the majesty and panoramic beauty of nature, a rare treat in a world made of concrete. It’s during these golden moments that you can understand why the ancients worshipped the sun. After all, only the divine could make London look good.