In a piece for Esquire back in 2000, Martin Scorsese sang the praises of fellow director Wes Anderson, citing his “fine sense of how music works against an image,” and calling a scene in his first feature, Bottle Rocket (1996), a “transcendent moment.” But what did he mean by that? What is the cinema of transcendence?

The answer lies in how our brains respond to a given scene. Everyone knows the feeling of being moved by a film; sometimes it’s to tears, a great wave of romance or sorrow washing over you; sometimes it’s to a whooping joy, a palm slammed on the couch with a shouted “Yes!” This is classic story-telling, using our empathy with the characters to create emotional responses. But sometimes films can move you in an unexpected way – a new combination of visual and aural stimuli create a clear space in your head; time stands still; the story, the actors, and anything else pertaining to the real world melt away, leaving you only to watch and listen. Such moments are a form of transcendence, a mini trip.

The key ingredient to these moments is music, the only language capable of expressing those feelings beyond the realm of words. As Scorsese rightly noted, Wes Anderson a modern master of setting scenes to music, creating two or three transcendent moments in every one of his films. Just one example is the scene in The Darjeeling Limited (2007) where the brothers, played by Owen Wilson, Adrian Brody, and Jason Schwartzman, meet their mother (a kohl eyed Anjelica Huston) in a remote monastery in the Himalayas. Anderson’s choice of The Rolling Stones’ Play with Fire for the soundtrack is inspired, and helps to lift the scene into the realms of the transcendental.

Another contemporary master of these moments is Sophia Coppola. Think of the scene near the end of Lost in Translation (2003) where Charlotte takes a taxi with Jesus and the Mary Chain crashing overhead on the soundtrack, a perfect unison of ‘80s shoe gazing with the blinking neon of a hyper-modern metropolis. Even in Coppola’s weakest film, Marie Antoinette (2006) there are some breathtaking scenes, such as the masquerade ball with Siouxie Sioux and the Banshees as accompaniment, another inspired pairing of 20th century Western music with an alien setting. 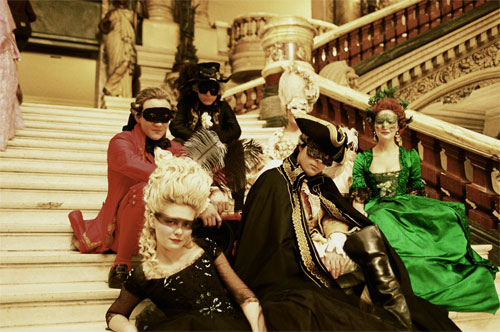 All of these moments show what’s happening within the world of the film; for Charlotte in Lost in Translation it’s the melancholy at the end of her holiday, for Marie Antoinette it’s the thrill of freedom from the stifling propriety of the court. A beautiful woman gazing out of a car window may be nothing new, but the music and the cinematography combine to make it a universal expression of that particular mode of melancholy.  Like the moments in classic storytelling, these scenes move us on an emotional level due to our investment in the plight of these characters, acting as pauses in the progression of the story where we have a chance to more fully inhabit the character’s emotions.  But Coppola’s scenes, like those of Wes Anderson, are also a celebration of cinema itself, of the practice of placing music over visuals. The right combination has nothing to do with storytelling, it is pure cinematic Satori.